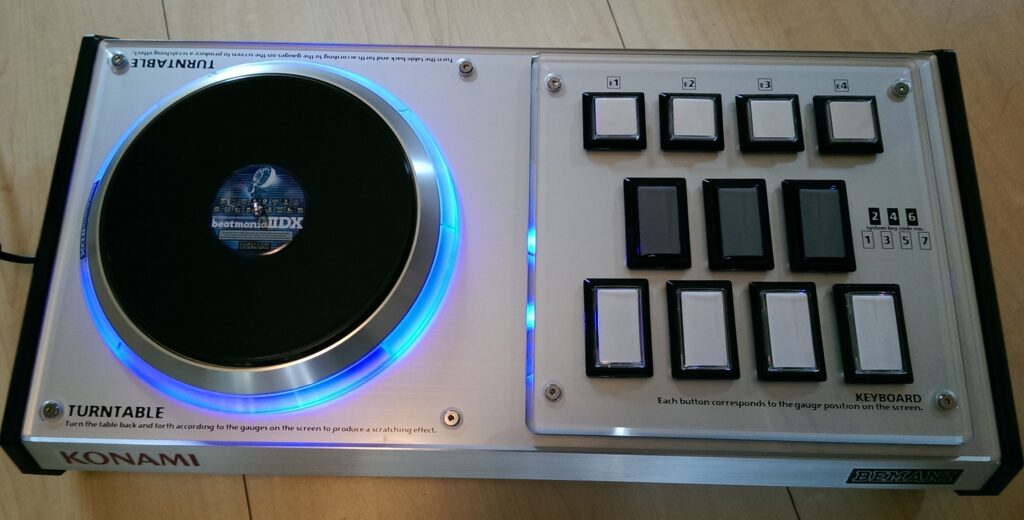 Yep, we got it. Our beatmania IIDX Premium Controller, or “NewKOC” or “PASC” or “IASC” or whatever you like to call it has finally arrived! What did we do first? A tear-down of course. Let’s take a quick look at the unboxing first: The box arrived unharmed, as is typical of major Japanese shipping services. Inside, a moderately strong set of cardboard held the controller in place: The manual and documentation was typical fare, with one exception part numbers were listed for the Turntable grip and sticker set as well as the switch/button assemblies. A 2.5mm hex wrench was included to open up the controller. Seems like the 3-month warranty will allow you to call Konami and request parts if anything breaks within that timeframe. On to the controller! Here it is. The USB cable is 3 meters long, or about 10 feet. As always, the lights always look better in person, but they were pretty much identical to the arcade counterparts: The four Effect switches have no lights in them: So how does it feel? Take a look at the videos below:

These aren’t Sanwas or Omrons. First, there are NO SPRINGS in these whatsoever. The keys rest directly on the switches, but the switches are fairly heavy. It’s not awful, but it might take some getting used to for anyone who has a specific resistance/weight setup and isn’t willing/able to swap out the keys.

If you’ve ever used a new generation IIDX arcade cabinet, the keys on this controller feel similar to the Start button on the new arcade cabs. All keys are the same, including the Effect keys.

As for the turntable, it’s not too bad! While the grip is not identical to the current “Empress”-style, it has a reasonable amount of resistance and a firm but not slippery surface. They’re only slightly less grippy than a brand new arcade-cabinet’s turntable. It’s also analog and supports that in INFINITAS as well. Scratching in the same direction more than once isn’t too much of a problem compared to other controllers and the current arcade turntable.

Next up, let’s take thing thing apart! To gain access to the switches, just remove the four hex screws on the keyboard platform and carefully lift it up. One thing to note – due to the odd diagonal orientation of everything, the wires on the right side have a tendency to get caught around the edge of the controller. Everything is quite neatly arranged and there are lots of cable clamps holding everything in place. As you can already tell, everything is diagonal. Why? More on that later…

All the connectors and wires have a rubbery shield protecting them from damage/corrosion/that one guy that always wrecks your controllers. Nothing is labeled, so be sure to remember where everything goes if removing any switches. It’s probably best to do that one at a time.

To take out a switch/key, Konami recommends this method. First remove the wires. This might take some time since they are clamped down on the connectors tightly.  Then, turn the switch counter-clockwise and lift it straight up. Some force might be required here. Here’s what the switch assembly looks like. They’re well-built, but not what we were expecting. To remove the switch itself, gently pry it apart from here: And here it is, a seemingly generic “YI HSIUNG” switch. We headed over to Tokyo’s famous Electric Town, Akihabara and asked around, and finally an older gentleman told us they were sold by the company “Shiba Shoji” as a set included with the A-5 buttons.

They’ve been around for a while as an alternative to Sanwas and Omrons, and seems to be popular for cheaper Pop’n Music replacement buttons.

One user compared the assembly to DJ Dao switches here. The button assembly has 6 parts to it similar to Sanwas: Wait a sec, what’s that? Yes, it’s diagonal, to match the rest of the button assembly. This diagonal design might mean a much longer life for the switches, but who knows?

Removing the 4 screws on the side of the controller lets you remove the plastic to see this gloriously strong base. You will not find a stronger controller than this: I mean, just listen to this satisfying clang:

We wanted to get inside a bit more. To do so, we had to first unplug the keys from the main PCB and place that whole assembly aside. Then, the 4 screws around the turntable could be removed, and the whole top panel could be lifted off, carefully. The green wire is, surprise, a ground wire! The small circular hole above the turntable hole is the only way to remove the ground screw from the base.

The red/black wire powers the LED ring, and plugs into the bottom-left connector on the PCB, below. The 2nd connector is unused (?!) and is identical to the 1st power connector. Maybe a problem with the 2nd connector was discovered in production, and the maker had to add on that riser and give us a nice bodge job on the final product… The 3rd and 4th connectors go to the two turntable sensors, while the 5th one is the USB output. On top are the connectors for LED power, the main 7 keys, and 4 effect keys. Let’s head back to the turntable. Thankfully, Konami realized that the toothed turntable platter design was not a good idea, and opted for a thing outer ring holding it together. the material is plastic – hopefully one that won’t warp over time. The slight tilt you see here doesn’t seem to affect the turntable’s performance, and the bracket holding them to the base is extremely strong metal. Not going anywhere anytime soon! The green ground wire’s other end connects here as well. The slight 〈 bend of the sensor bracket is done on purpose for accuracy: After removing the 3 screws on the platter, we get this, and then remove 4 more screws. The Turntable assembly comes out from the top cover like so: And here we have, the 5th revision of the Turntable LED board, made in April. After removing the smoked clear plastic TT ring, we’re left with the metal TT base. From here, we didn’t want to go any further and remove the turntable stickers to check underneath there. However, it feels and seems similar to a typical arcade TT, with a slipmat of sorts underneath the platter.

Overall, for the price, it’s a great ASC. Orders have been closed, and it’s not certain whether any more will be made or not.

Finally, Konami and the controller design team have responded to player questions and provided many answers. We translated it previously, so take a look below:

Q. Looking at the photograph, the distance of the turntable from the keyboard appears to be different than the arcade…is it?
A. The distance is the same as the arcade.

Q. What’s the difference in size compared to the arcade?
A. Other than the size of the turntable, size and spacing are the same.

Q. What material is the controller made of?
A.   (This was later revised to aluminum alloy)

Q. Are you using, or will there be an Empress (EMP) turntable sheet option?
A. No, and there are no plans.

Q. Can we see a picture of the internals?
A. Because it is still a prototype, we’re not able to show you. If the controller goes into production, we will publish an image.

Q. Is it easy to switch between 1P and 2P without tools?
A. The switching is done with an Allen wrench, which comes with the controller.

Q. Can we remove or replace buttons/parts one-by-one or does it have to be all at once?
A. Parts can be replaced individually.

Q. If we need to repair/do maintenance on the buttons, how can we do this?
A. You should use a hex wrench.

Q. With the past arcade style controller, you could put two side-by-side and play DP. Can you do the same with these?
A. If you put a little space in-between, you can play with arcade spacing.

Q. Can I use this with a PS2?
A. No, this only works with the dedicated software (INFINITAS).

Q. What do the four function buttons map to?
A. “Start button”, “Options”, “Change difficulty”, and “Menu”.

Q. If I don’t want to have the LEDs light up, can I disable them?
A. Sorry, but you can not toggle this ON / OFF.

Q. Do you need any special software drivers?
A. When you connect the USB plug, the driver will be installed automatically.

Q. Is the input DirectInput or XInput? Is it recognized as a unique USB device?
A. It uses DirectInput. It is a standard Windows driver.

Q. Can I play DP with one ASC and one keyboard?
A. Yes.

Q. If my address changes, can I update it before it ships?
A. Yes, the address can be changed up until shipping prep.

Q. If production is confirmed, will orders be accepted afterwards?
A. Currently, there are no plans.

Q. Can we use a payment method other than a credit card?
A. We’re sorry, credit card payment only.

Q. Can I split the credit card payments?
A. No, full payment only.

Q. When will the controller ship?
A. It’s planned to be early Summer 2016.

(The following 2 questions were already in English! Thanks for listening, Konamistyle!)

Q. Will you please sell these in the USA?
A. This is sold only in Japan.

Q. Is the button easily swappable by user? So I can maintenance or change it for aesthetic reasons easily.
A. Yes, you can swap the button for maintenance.